After suffering an embarrassing 4-0 defeat to local rivals ‘Liverpool FC’ midweek and now failing to make the final of the F.A Cup, the Everton faithful have seemingly unanimously given up hope with Roberto Martinez. The recent performances the Toffee’s have been producing under the guidance of their Spanish manager are, for the majority of the time, simply woeful. The team on paper is notably one of the best squads Everton have had in a long time but a ‘team’ is what they are not. These player have been starved of chemistry and organisation meaning what is left on the pitch is a group of men who don’t know what direction of play they should take. These players need a leader and these displays show they have not found one in Roberto Martinez so it is time to part ways. 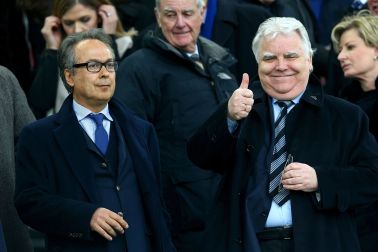 Bill Kenwright has always been loyal to his managers, which is evident in David Moyes’ 11 year tenure, but with Farhad Moshiri now owning the majority of the shares and having the ambition to succeed it wouldn’t be surprising if he already has a new boss in mind.

Farhad was previously a shareholder in fellow PL team Arsenal but due to his small stake in the club, he was in no position of power to have any input in the major business of the club. Along with 49.9% of Everton now in his possession it would only seem natural that his contract contained a clause giving him a certain amount of control over the final decisions made and, whether Kenwright likes it or not, Farhad is now the main source of money so if he finds himself without a reasonable input they would run the risk of losing him to another club.

Martinez is no doubt a

great scout for finding untapped talent, however utilizing that talent is a different story. With a rumored £150mill budget for the summer it wouldn’t be an impossible task to tempt a manager such as Pellegrini or Mourinho to the club who have the stature to attract those star players that could ultimately take the club to the next level.

It’s a low point for everyone at Everton but Farhad Moshiri could be the man to pick them back up but it all starts with a new face in charge so, if he is serious about making Everton a top team again, it won’t be long before he’s calling a taxi for Roberto.

There is light at the end of the tunnel.

2 thoughts on “Moshiri to the rescue…”