As Everton continue to deliver underwhelming and dull performances under the guidance of Roberto Martinez, the fans are unsurprisingly beginning to turn on the Spaniard and as the pressure continues to builds it looks increasingly likely that he will be making a swift exit in the summer, or maybe even sooner. The Toffees are not meant for bottom-half finishes, especially with the squad they have, but as the season begins to draw to a close the relegation battle below is unnervingly close.

With a possible manager vacancy soon to be available at Goodison Park it wasn’t going to be long until the rumors began doing the rounds in the football community and as the week continues there seems to be two front-runners in the rumor race. Marcelo Bielsa and Jose Mourinho.

First of all, those who primarily focus on the Premier League may not know who Marcelo Bielsa is so here is a bit of background. Bielsa is a 60 year old Argentine coach who has previously gone on to manager his national team as well as Chile. The improved quality of football he brought made him somewhat of a ‘cult hero’ among the Chile fans

especially when they qualified for the world cup. Marcelo has also managed at club level in Athletic Bilbao and Marseille in which he could boast a 51% win rate and a fourth place finish. Bielsa’s teams usually adopt his signature 3-3-3-1 formation as it allows for a swift transition between attacking and defending  which could prove beneficial in the PL due to that fact teams usually rely on quick counter-attacking when playing away from home. The formation that he adopts also results in a superior number of players putting pressure on the ball in each part of the pitch when not in possession. Many notable mangers have been influenced under the command of Bielsa such as Pochettino and Matias Almeyda and in 2012 Manchester City’s Pep Guardiola hailed him as the “best manager in the world”. I do believe that his style and tactics would prove fruitful for a team in the premier league and it isn’t the first time this season that he has supposedly been contacted by as PL club as Swansea were keen to bring in the Argentine as a replacement for Gary Monk but failed to obtain his signature.  Whilst there has now been new reports that contact hasn’t been made, I still believe there could be something to it as he has been linked to English League before and perhaps Everton just want to keep it behind-the-scenes.
The other man in the frame for the job is non other than ex-Chelsea man Jose Mourinho. Now, it is no secret that in the past Jose has spoken quite fondly of the Toffee’s in regards to how passionate the fans are and that they are a team he could have seen himself managing in the future but with everyone expecting to see him go to Manchester United, is it possible he could throw a curve-ball and end up at Everton? Wishful thinking? Maybe…maybe not… With Everton’s recent investment from Farhad Moshiri (who is reportedly close friends with Jose’s agent) it means that the Merseysiders are no longer a club to be overlooked by both players and managers. The financial backing will allow the club to seek out star players which would definitely appeal to a man like Jose especially as he is already world renowned as a top 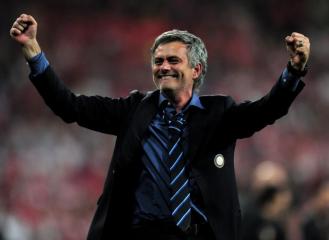 manager and since he has taken a recent knock to his pride after being fired by Chelsea he will no doubt feel like he needs to prove himself, and whats a better way than taking a currently mid-table team and getting them through to the Champions League? A move to Everton would also give him something he has wanted for a long time…John Stones and, unlike under Martinez, I think Stones would certainly begin to shine again. Jose has admitted he wants to stay in England but he has also had more than one offer on the table which may could mean a representative has already approached him about a move to the blue half of Liverpool. Mourinho is a winner and he has proved that in the past, he has that balance of play which flourishes in the Premier League and isn’t afraid to ‘park the bus’ to secure a win. Everton need a successful manager and Jose needs a quality team, and as Van Gaal has again reiterated he expects to see out his contract at United, it will only be a matter of time before the two parties consider a deal.

I am not saying Everton will get one of these managers for definite, however I think they are two men that the club should look into because if there is one thing I am sure of, it is that Roberto Martinez cannot stay at Everton.