On the 12th of March Everton secured their ticket to Wembley and a F.A cup semi-final in style. A brace by their former strike – Romelu Lukaku – was enough to send Chelsea crashing out of the coveted competition.

It has been an underwhelming season in the league for Everton despite the talent they posses in their squad, however there is a glimmer of light at the end of the tunnel and that could be the reflection off some long-awaited silverware. It has been 20 years since the Toffee’s last took home a trophy but as only four remain in the competition, Everton seem favorites to win the F.A Cup. 90 minutes against an under-performing Manchester United or an in-form West Ham is all that stands in the way of Everton reaching the final, and as the Blues are yet to concede a single goal in the competition, it is evident that on their day nobody can stand in their way. 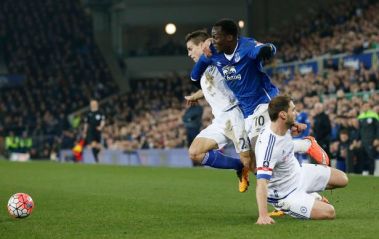 oshiri who joined Chairman Bill Kenwright in watching his first game at Goodison, and after the convincing 2-0 over the former Champions, maybe he is the good-luck charm we have been waiting for.

It is yet to be seen whether Martinez is the right man for the job at Everton but even if they won the F.A cup, in my opinion, his tenure as boss should still be over. A club the caliber of Everton should not be settling for 12th place finishes each season. They should not be even settling for 10th-7th place finishes. Everton should be challenging for European places each and every campaign but without that they are likely to lose their star players. When the time eventually comes where Roberto is sacked, the board must focus on bringing in a manager who is proven in the league. As much as fans may want someone like Duncan Ferguson in charge, he has literally no experience in managing so someone like him would have to go away, gain experience, prove he has talent in that department, and then, and only then, he should be considered. With the new investment of Farhad Moshiri the Toffee’s should now be able to attract the ‘higher-end’ mangers to the club and once they see the potential of the squad and determination to succeed they could end up with the right man to lead them to greatness.

But until then, lets go out and win us a cup. COYB.